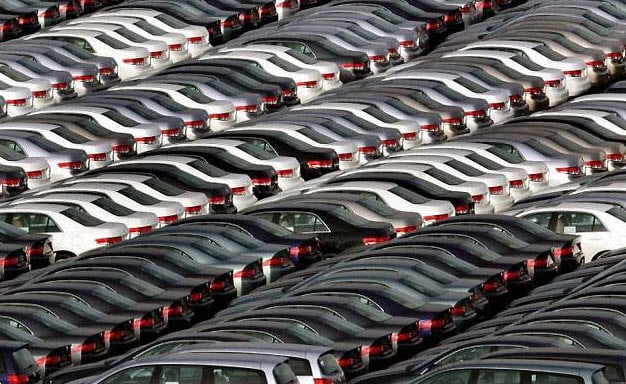 Have you ever wondered where brand new cars that never sell go? Department stores sell their unsold inventory to outlets and stores such as Marshalls and Ross, but where do unsold new cars go?
Car manufacturing, one of the most important industries in the world, is looking better than ever for certain companies, but other car companies are struggling to stay afloat and are being forced to close their factories and lay-off thousands of their employees.

The reasoning behind this? Consumers now have plenty of options when it comes to buying a new car, driving the price of new cars down. But even though consumers have a fair share of premiums at a fair price to choose from, dealerships still refuse to lower the price on their unsold inventory. So where do these unsold new automobiles go? Well, they’ll most likely be sent to a field to be forgotten, where millions of other unsold cars go to slowly deteriorate without being maintained. Car companies prefer to do this than to sell them at a lower cost and make-up some of their loss.

So why aren’t dealerships selling their unsold inventory at a cheaper price to make-up for some of their loss? Car companies believe that if they start selling their unsold models are at clearance price, that consumers will just start waiting for the cost to go down significantly before ever purchasing a new car, driving the cost of a new automobile even lower than it already is. Wish the same could be said for auto insurance rates.

Every day in the United States, a large number of cars are being produced. Most of these cars never get sold to customers because people just can’t afford them. The car manufacturing industry can’t stop producing new automobiles because they would have to close their factories and lay off thousands of their workers. This move would also affect the steel manufactures as they won’t be able to sell their steel, further adding to the recession.

The problem isn’t getting any better, it’s only getting worse. Car manufacturers are constantly coming out with new models with the latest technology in them. This had led to a whole new practice of dealerships constantly sending their unsold inventory to huge parking lots. The problem then just keeps on mounting up. In the end, the unsold cars that are older than two years old, will have no alternative but to be either crushed, dismantled and/or their parts recycled.
Want to see for yourself? Do a quick search on Google Maps of Baltimore, Maryland, looking south of Broening Hwy in Dundalk, there you will see a massive expanse of space where many unsold cars are currently parked. This isn’t the only huge car lot of unsold vehicles that exists, there are numerous lots just like this all over the world.

Here’s a fun fact: currently, there are 6 billion people on our plant, and 10 billion running cars. This is because most families own an average of two to three cars. Here’s another fun fact: you may be able to lower your current car insurance rate by simply talking to your insurance agent and taking advantage of any special discounts you may not be currently aware of.

So what do you think of these millions of unsold cars being left out in parking lots to die? Sound-off in the comments section below.

Summary
Article Name
Where Brand New Unsold Cars go to Die
Description
Find out why millions of brand new unsold cars are left to die in parking lots all over the world rather than be sold at a clearance price to customers.
car manufacturersunsold new cars

5 thoughts on “Where Brand New Unsold Cars go to Die”