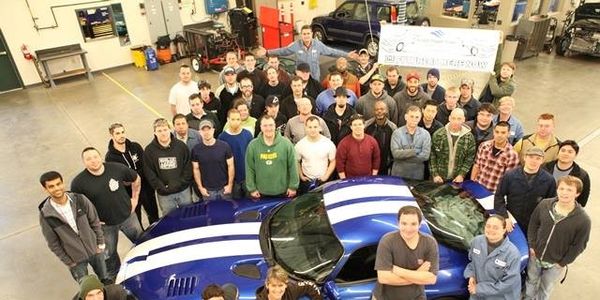 It was bad news for students and faculty at South Puget Sound Community College (SPSCC) in Olympia, Washington – their prized 1992 Dodge Viper SRT (believed to be the fourth Viper ever made and one of the first hardtops) is living on borrowed time—two weeks to be exact.

Chrysler informed the SPSCC automotive technology department that their Viper, one of 93 first-generation Dodge Vipers, was on the chopping block, and ordered them to crush the car within two weeks. This kind of damage probably won’t be covered by any car insurance.

The car, a pre-production model and not certified for street use, was originally donated by Chrysler to Shoreline Community College, but SPSCC took possession of it in 2007.

Car manufacturers commonly loan vehicles to educational programs to teach students about car repair and engineering. The Viper has been estimated to be worth $250,000, but the school is not allowed to sell it because Chrysler still maintains legal ownership of the vehicle. Even celebrity car collector Jay Leno tried to buy this Viper from Chrysler, but they turned him down since the car is not street legal.

SPSCC wasn’t given an official reason for the request, but it’s rumored that the destruction of the Vipers are the result of two educational Vipers that “got loose” and were involved in accidents on public roads, leading to millions of dollars in claims against the automaker.

As the deadline approaches, SPSCC students have started an online petition in an effort to save the Viper – they hopeful to place the car in a good home with an automobile museum. But unless Chrysler reverses its decision, tragically, the car is destined for the scrap heap.

Officially, Chrysler says “As part of the donation process, it is standard procedure — and stipulated in our agreements — that whenever vehicles are donated to institutions for education purposes that they are to be destroyed when they are no longer needed for their intended educational purposes.”

You can bet owners of street legal Vipers are checking to make sure they have classic car insurance coverage that’s up-to-date. I’m sure Jay Leno is.
Do you think Chrysler shouldn’t destroy these rare vehicles? Feel free to share your thoughts in the