Tesla’s Tweet “About Time to Unveil the D” Sparks Speculation 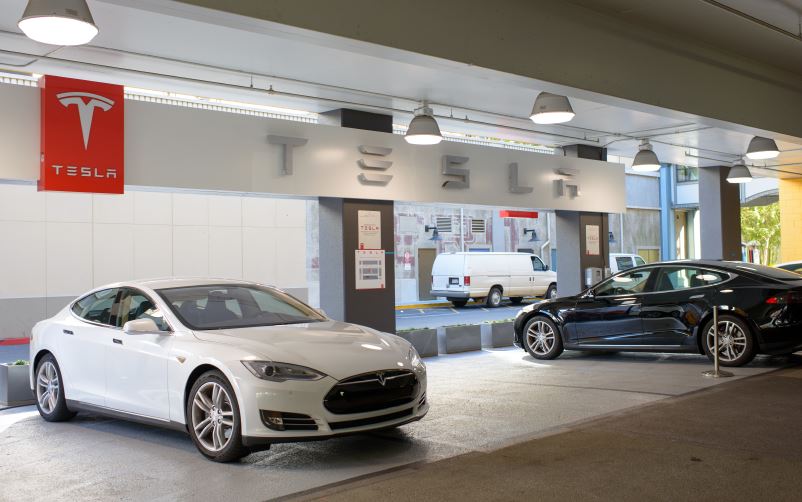 Few car companies seem to be spearheading the efforts of technological advancement in quite the same was as Tesla Motors. Starting with their signature Model S, the world’s first premium electric sedan, they’ve captured the imaginations of an entire world of people who thought that gas power was here to stay. Environmentalists and car enthusiasts alike have gravitated towards this now-iconic brand of exotic cars, and those who follow Tesla Motors CEO Elon Musk on Twitter know that something new and mysterious is on the horizon.

On Thursday, October 2nd, Elon Musk tweeted that it was “About time to unveil the D and something else.” Not only did this tweet alone raise Tesla’s stock nearly 5%, but it has sparked enthusiastic speculation in the community. With no details and only a teasing image of the car’s front end peeking out of a half-open garage door, followers of Elon Musk and his company can only wonder: What is the D, and what is this “something else” that will be unveiled alongside it?  And, will car insurance rates for it also be exotic?

Many have speculated that the D will be some variant or improvement on the original Model S, but even the speculators out there can’t decide what the letter itself stands for, if anything. Some predictions include features like all-wheel drive and Mobileye collision avoidance technology, while others hypothesize that the D will be an entirely new vehicle.

Analyst Theo O’Neill of Ascendant Capital Markets muses that “The D stands for drop top,” and that “It’s a convertible.” This prediction seems somewhat likely due to the recently customized convertible Model S that emerged from Newport Convertible Engineering in Huntington Beach.

Karl Brauer, a senior analyst at Kelly Blue Book, took a different approach to it. You know that D doesn’t stand for diesel,” he joked, “Could it stand for delivery? I think it could be a small pickup or delivery truck. Elon mentioned a truck several months ago, and a lot of people blew that off. But the truck market is very dynamic right now; volumes are high, and there are a lot of new models on the market. If you are a small business and you deliver pizzas or flowers, it would be great to be able to do it on electricity.”

The consumer base for the popular Model S are known for following the company’s progression, and Al McKersie, 51, owner of a Model S, has his own insight to contribute based on observations. “The all-wheel drive S has been rumored to be in the works and in existence for months,” he says before pointing out that many prospective Model S owners are simply waiting for the AWD model to emerge.

Owners of the exotic car line exist all across America, but most sales occur in mild and temperate areas such as California and the south. Some say that the rest of America is waiting for that AWD because they need a car that can stand up to harsh weather conditions and slick roads. Car insurance isn’t cheap, so people in colder areas need to know that the investment they’re making isn’t in unnecessary peril.

How do you feel about the advent of alternative fuel? Do you own a Tesla or know someone who does? Feel free to share your insights in the comments section below.

Summary
Article Name
Tesla’s Tweet “About Time to Unveil the D” Sparks Speculation
Description
Tesla CEO Elon Musk teases a new vehicle, tweeting “About time to unveil the D”. We have the latest theories on what that might mean.
Author
Nathaniel Liles
Electric CarModel D