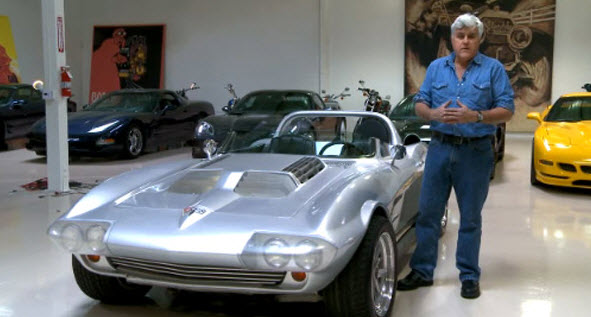 Jay Leno is well known, of course, as the long-time host of the Tonight Show. And now that he’s officially “retired”, he can devote more time to his other passion – his world famous collection of nearly 200 cars and motorcycles. I wonder if he gets a multi-car discount on his car insurance.

Leno’s “Big Dog Garage” holds one of the world’s greatest car collections, along with a state-of-the-art custom-built garage.

Jay likes to drive his vehicles in the Southern California area and can often be seen out and about on weekend trips around Los Angeles.

One of Jay’s most prized possessions in the collection is his 1955 Buick Roadmaster — the first car he bought and in which he came to California. As a struggling comedian in Hollywood, the Buick also served as his apartment on wheels.
Jay’s restored 1955 Buick Roadmaster

• He paid $350 in 1972
• Drove it to his first Tonight Show appearance in 1977
• GM Performance Parts ZZ572 crate engine — 620 horsepower
• Compression Ratio – 9.6:1
• Front suspension – C5 Corvette
• Rear suspension – C4 Corvette
To keep everything in top shape, Jay has a full-time team of mechanics who are experts at repairing, restoring, and customizing anything on wheels.

Jay answers his global warming critics
In response to critics who claimed his vast collection of cars was causing global warming, Leno
teamed up with General Motors to create the EcoJet, a two-seater, environmentally-friendly
concept car with serious speed capability.

• Designed to run on biodiesel fuel, using a Honeywell LTS101 gas turbine instead of a piston engine.
• The engine is normally used in helicopters and provides 650 horsepower, using a classical drivetrain with clutch and gearbox to drive the rear wheels.
• The car contains two separate gas tanks; one contains the main fuel, a biodiesel soy bean oil, and the other contains a traditional clean burning jet engine fuel.
• The JP-4 jet engine fuel is used to start the turbine easily at the beginning of a trip and also to run the engine at the end of a trip to clean it; biodiesel fuel tends to gum up a turbine (causing it to seize) if the biofuel is not cleared.
• The exhaust air is 1000 degrees Fahrenheit in normal operation and 1800 degrees Fahrenheit at full power.
• The car runs on refined cooking oil and so it produces the same kind of smell created by cooking French fries.
• The car has a fully-featured Azentek PC running Microsoft Windows Vista, with two LCD screens on the dashboard, one for the aircraft style digital gauges and another for the media and navigation controls,
• Two other smaller LCD screens are placed on the dashboard to provide rear views, as the car has no rear view mirrors and uses cameras instead.
• The functions are controlled by touchscreen or by speech recognition software using a multiple microphone array.
• The car was assembled by the Big Dog crew (mechanics employed by Jay Leno, usually to help him maintain his large collection of cars).

Did you know that Jay’s father was an insurance salesman? You can bet Jay knows the value of having good car insurance.

Do you think Jay Leno is too obsessed with his collection? Feel free to share your thoughts in the comments section below.